In the recent past, the hammer was commonly used to drive nails in woodworking. The use of a hammer consumed a lot of time and energy for the completion of a job. But now with the invention of nail guns, we can now complete woodworking jobs easily and with utmost efficiency in the shortest possible time.

The form and shape of both the tools are almost similar but their usages are different in woodworking. The similarities in shape sometimes mislead the people that both the tools perform the same function. 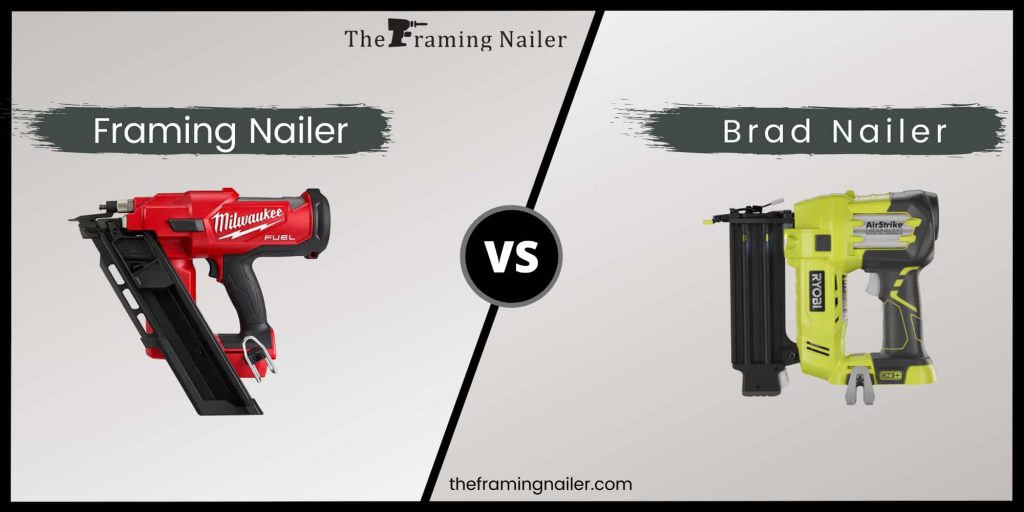 We use a framing nailer, a heavy-duty tool for the construction of houses, frames, and structures whereas brad nailers are meant for light work of finishing such as attaching pieces of trim, etc. Let us now review the details about framing nailer vs brad nailer which will give you a clear idea about their differences and usages. 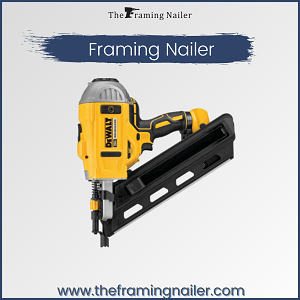 A framing nailer is a powerful tool in the family of nail guns. Nail guns and especially framing nailers have changed the trend of using a hammer for fixing the nails into the wood. Every woodworker wishes to have this tool as it proves really helpful in woodworking. A framing nailer, a heavy-duty, and special tool for large scale projects such as the construction of houses, etc. Framing nailers shoot the nails of 1 ¼ to 3 ½ inches. 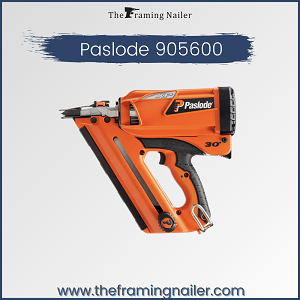 Paslode 905600 is a heavy-duty tool of Paslode company. Its heavy-duty feature does not mean that this tool is heavyweight, it weighs only 7.2lbs and can drive the nails of 2 – 3.25 inches into the lumber easily.

Low temperature:
Most of the farming nailers do not perform well or fail to perform in chilly weather. But this Paslode 905600 nail gun for framing performs really good in chilly weather where the temperature is even low as 14 F. However this tool is a bit pricey. You can also check best cordless framing nailer. 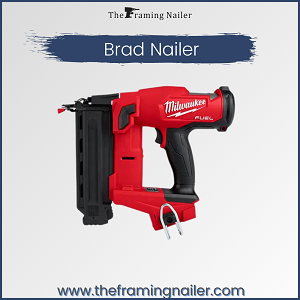 Brad nailer is a member of the nailers family. They use small size and short length nails with small heads. Usually, brad nailer uses 18 gauge nails called brads. It is worth mentioning, the higher the number of the gauge is, the thinner the nail is. For example, if we have 16 gauge nails it is thicker than 18 gauge brad nails. Similarly, if we have nails of 19 gauge it is thinner than 18 gauge brad nails.

Brad nailers are very useful when one does not want to use wood putty, as its brads leave so small holes that sometimes need no wood putty to cover the hole. Due to this property, we utilize brad nailers for giving finishing touches to a project like attaching trim or molding on a cabinet.

Brad nailers look like nail guns but can not shoot nails like other nailers. For example, you want to fix a piece of trim then it will fulfill your need, in its place if you use a nailer with regular size nail the thin piece of trim will either develop crack or split. The brad nailers are not good for heavy-duty work because brad can not hold heavy material. They can not shoot nails in hard material such as plywood etc. However, they are handy and useful for finishing work.

The reason why framing nailer uses longer nails as it performs heavy-duty and large scale work while brad nailer shoots thin and small size nails because as it works in small scale jobs like adding trim to wood. Typically most of the brad nailers shoot 18 gauge nails which are thinner than the nails of framing nailers. It provides nice holding power but still less than framing nailers.

Nail Holes:
We can see the holes left by the nails of the framing nailer with naked eyes. You need to add wood putty to hide them. While brad nailer nails leave small holes which sometimes are hardly visible and even a small amount of wood putty can hide them.

Durability:
We use large size and high powered nails for the construction of houses, structures, etc because the big size structures withstand wind storms, earthquakes, etc. So we need a high powered and heavy-duty tool for fixing large size and strong nails. To cater to the requirement the manufacturers produce framing nailers to perform these heavy-duty jobs.
While brad nailers perform delicate work at a small scale. The finishing of woodwork jobs needs the use of brads where framing nailers can not work. For example, attaching trim is done through the use of brad nailers.

When are they used:
If we divide the project into two stages i.e. initial and final stage, the framing nailgun performs in the initial stage, when we have to construct frames and structures of houses. While brad nailer works with good results for adding trim to wood etc. 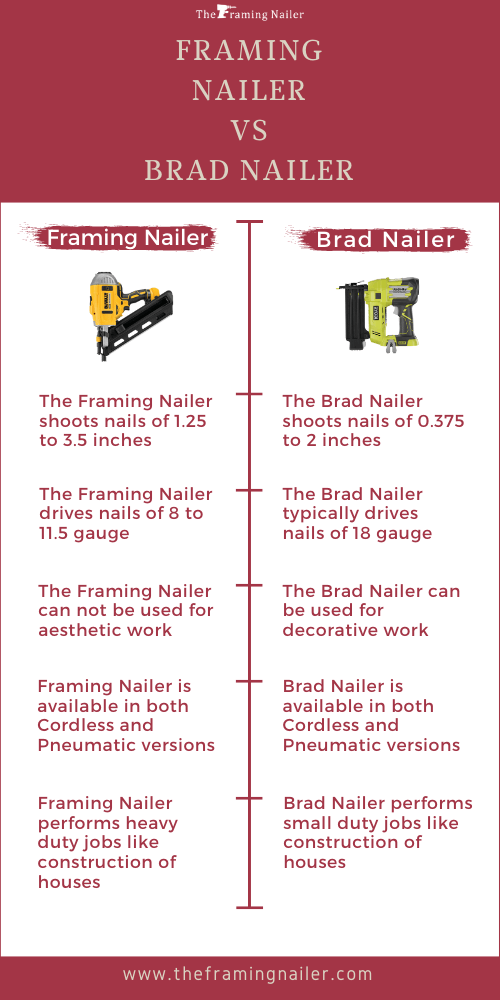 We expect after reading framing nailer vs brad nailer now you are well aware of both the tools. They are basically different tools, each one has very different uses and one can not be used in place of others.

In modern times, you need a quick fix solution for every problem with the utmost efficiency. In the recent past, either hammer was used or services of a carpenter were utilized for fixing a nail in the house.